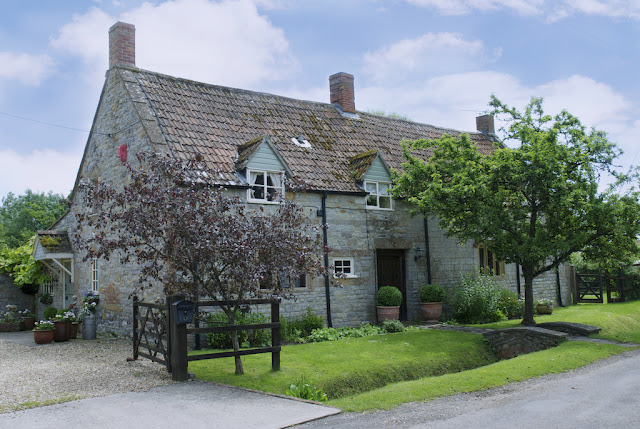 Built around 1550, Tina and Martin’s Somerset home was originally two farm cottages which were converted into one house in the 1970’s. The original wash house, once used for stringing pearls still remains in the grounds of the 2 acre garden, as does the old brick toilet.  Tina now uses the old wash house as a studio for her wedding flower and chocolate box business and Martin uses the disused toilet as a garden shed. 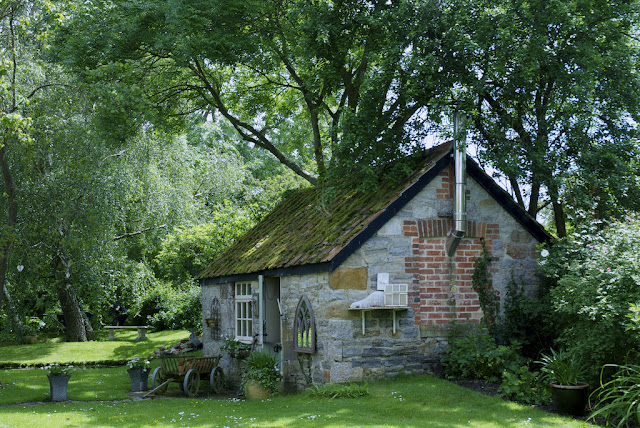 Entranced by the beautifully preserved blue lias flagstone floors, original mullian windows with seats, natural oak beams and an impressive historic inglenook fireplace, they put aside their concerns about the neglected condition, determined to restore it back to its original charm. ‘We hoped that together we could create a comfortable and beautiful home as a project for our retirement’, says Tina. Also they were both drawn to the garden which was overgrown and neglected. ‘When we acquired the field it was full of prize winning stinging nettles’, says Martin. 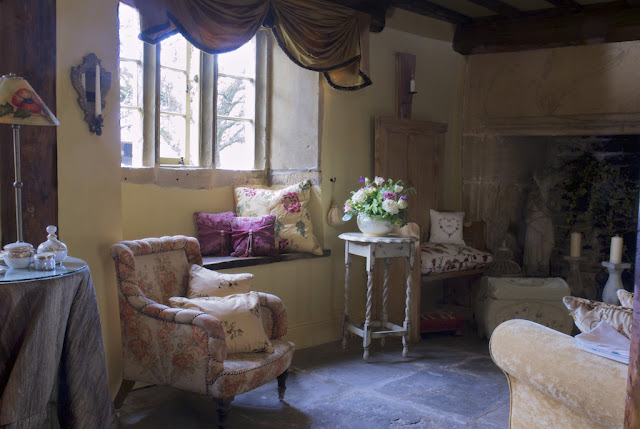 From an early age Tina had been drawn to everything that was old and full of character. ‘I have always believed I was born in another time’, she says. Having already enjoyed restoring a couple of properties, she suggested to Martin that it may be a good time to look out for a new project. ‘This historic stone house was definitely ‘old and interesting’, says Tina. ‘ It was in quite a bad way in parts and although we knew it was going to take a lot of time and effort, it would be worth it in the end.’ 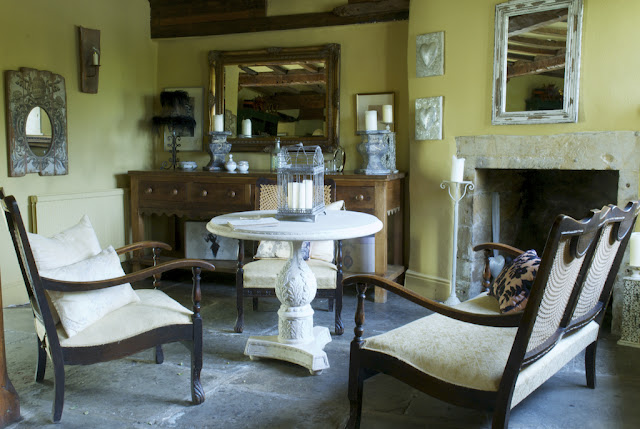 Still living in their cottage in the Chiltern Valley they would journey down to Somerset on their days off to work on the house. The first job was to hire a skip and take up all the carpets. Working as a team with their good friend Vincent, a builder by trade, they slowly renovated this beautiful old stone property. ‘We pulled the plasterboard down together, Martin would then work on filling the walls and Vincent plasteredand painted, says Tina. One by one, the ceiling plasterboards were taken down, starting with the one in the guest bathroom exposed ancient natural oak beams. ‘We immediately suspected that underneath all the plasterboard encasing the rest of the house, we were about to discover the same’, says Tina. Sure enough the house soon started to open up and come to life. Stripping away the old décor was hard work but revealing the house’s natural hidden beauty was well worth it. The beautiful ancient oak beams, some with old markings from previous carpenters, were such a delightful discovery. In the master bedroom they raised the horizontal beams, which were individually numbered, upright against the wall to make a feature of them. Throughout the upstairs old reclaimed floorboards that were painstakingly sanded and oiled replaced all the chipboard on the floors. ‘Sanding and oiling all those boards was a labour of love but well worth doing’, says Tina. 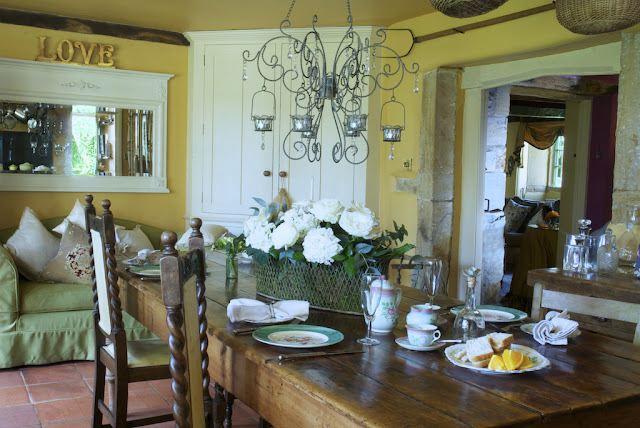 The renovations yielded an unusual and unexplained incident one day while some plumbing was being done upstairs in one of the bedrooms. ‘Water started running down the walls in the dining room,’ says Tina, ‘we immediately turned the water off at the mains and checked under the floor but couldn’t see where the water was coming from.’ 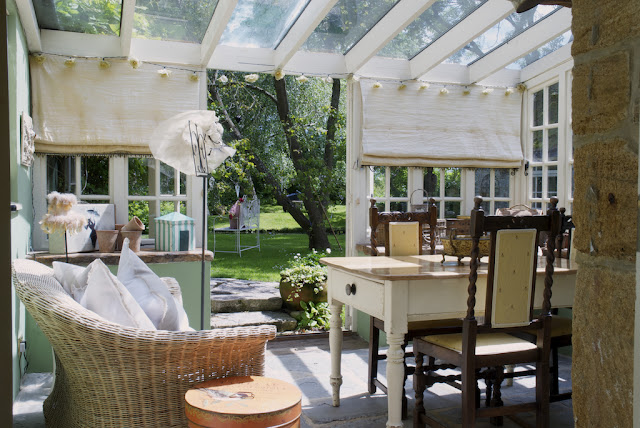 Once the kitchen was gutted, Tina enlisted the skills of a local craftsman who built, fitted and hand painted the units in cream colour. Integrating a bespoke ceiling to floor larder unit in the corner of the room has not only added more character to the room but is useful for extra storage. ‘It looks like it has been here forever,’ says Tina.  Knocking through the wall and fitting classic French doors instantly opened up the kitchen out onto the terrace and subsequently created a light filled family space. The small floor tiles were not in keeping with the period of the property and were replaced with Terracotta tiles throughout the scullery and kitchen, and their good friend Vinney built the plinth for the Butler sink and plumbed it in. ‘I had some stonework added around the door frame to compliment the stonework surrounding the original back door opposite, ’says Tina. ‘ I have spent a lot of time over the years learning to create an ambience through taking time over detail. It is possible to create a beautiful and welcoming home on a limited budget.’ Tina loves collecting pieces of furniture, antiques and collectibles. She enjoys creating atmospheres in each room, for example the simple collection of terracotta plant pots, vintage wicker baskets and beautiful French linen cushion covers in the garden room. Her attention to detail is impeccable and fresh flowers and candles in stone urns, planters and holders adorn each room. ‘Our home is full of beautiful and interesting collectable junk,’ says Tina, ‘ I love it.’ 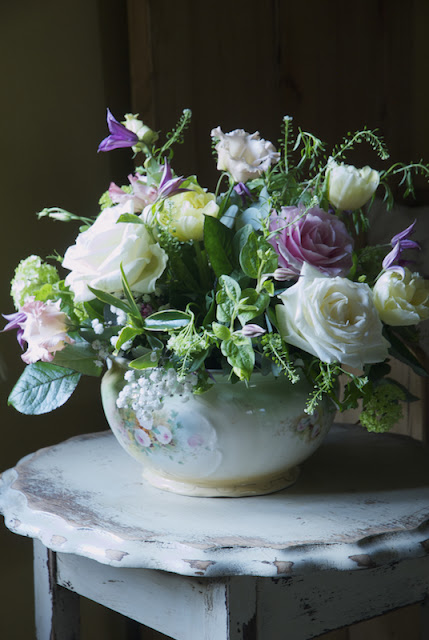 There is a definite French influence throughout the house. The rich colours of the walls, some painted in Farrow&Ball’s ‘Orangery’, are a backdrop to the neutral tones of much of the furniture, such as the built in larder cupboard in the kitchen and the stone table in the drawing room. Tina had the French rattan sofa and chairs in the drawing room repholsterd using a soft gold silk. ‘I tend to use chalk paint when upcycling furniture because it is easy and gets the natural effect that I like’, says Tina.  The occasional table in the kitchen was painted in a stone colour from Annie Sloan range and then distressed with sandpaper. 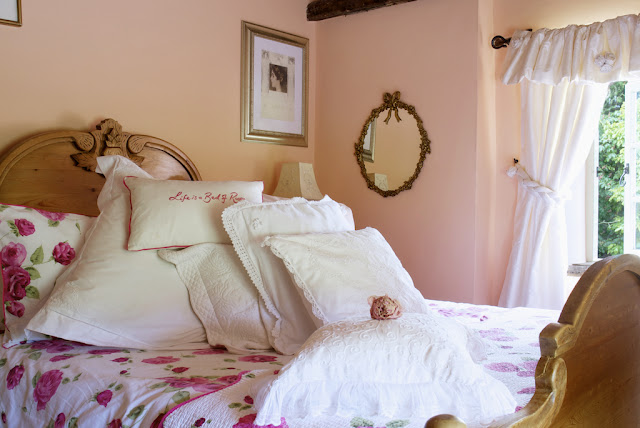 Having lived in this beautiful house for nearly 12 years, Tina and Martin have created a unique, beautiful and comfortable home. They love it in the summer when the roses bloom and the wild meadow is full of cow parsley, poppies and heady scented lavender. ‘I love wandering through the meadow on a balmy summer evening enjoying the peace and tranquillity’ says Tina ‘at the far end of the meadow is our wonderful summer house, which we call Skip Hall! This was built from the entire contents of a neighbours skip,’ The house is constantly evolving and changing because Tina is always moving things around  adding  new pieces of furniture, flower arrangements  and reorganising her much loved treasured collectables. 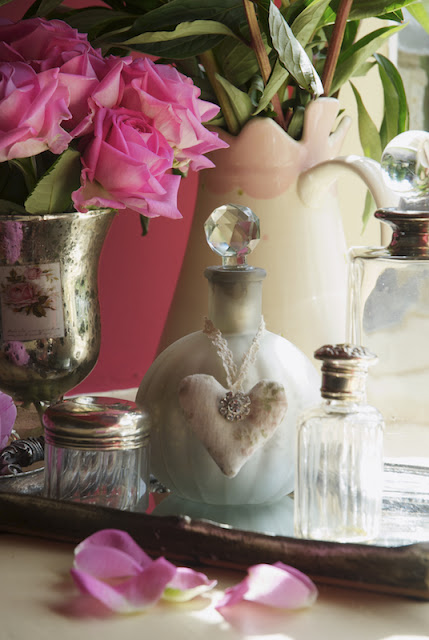 
Tina enjoys creating beautiful, interesting spaces and is not afraid to move pieces of furniture, mirrors, lamps or ornaments around the house. ‘I am always moving things around to create a certain mood or new look’, says Tina,’ the chandelier in the kitchen is often moved into the dining room when we have guests for supper’ 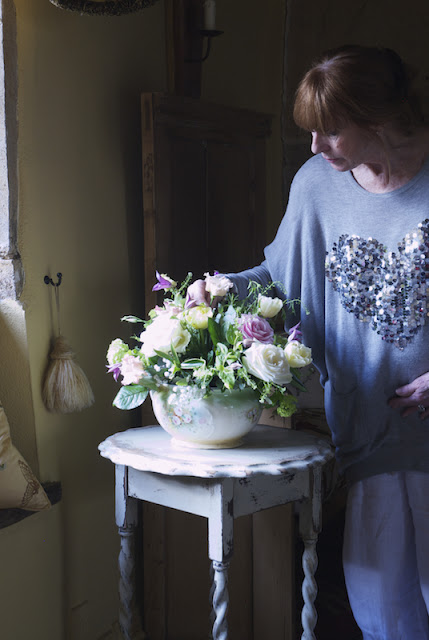 A project, whether large or small is achievable on a budget!  It’s not always about how much money you spend but is more about how much time and input you are prepared /able to invest in it.  It is possible to create unique spaces and fill them with beautiful things on a budget! Get creative! 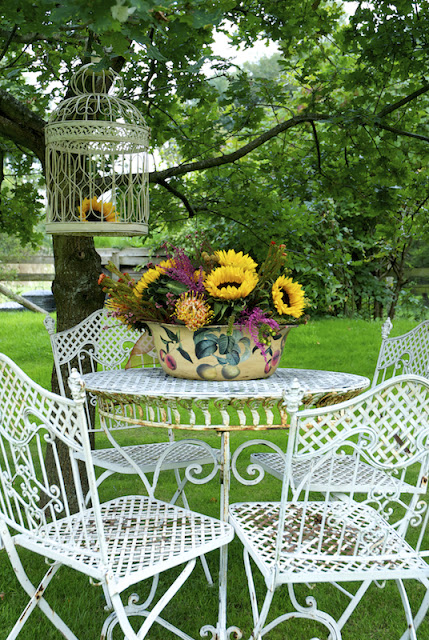 Try to source the original piece of furniture or have something made from scratch ie reclaimed materials as these will stand the test of time, look authentic and be a great backdrop to other less expensive curiosities or items of interest. For example, the country style kitchen table was made up from old oak floorboards reclaimed from a local school. The inexpensive wired planter filled with heavenly scented flowers fills the room with scent and immediately creates an individual and stunning table setting. Having made a complete summerhouse out of reclaimed timber and materials from an entire skip, proved cost effective and provides the garden with an sense of individuality and fun. Mexican Chimeneas can be found for as little as £50 The Rattan Garden furniture, umbrellas lamps, baskets and trellis can be sourced cheaply online, on sites such as Ebay and Gumtree. 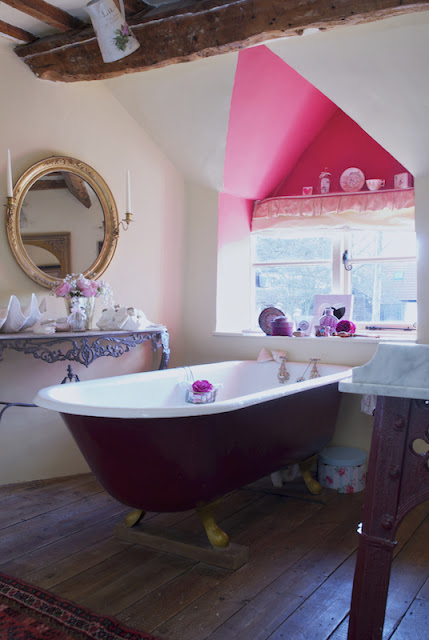 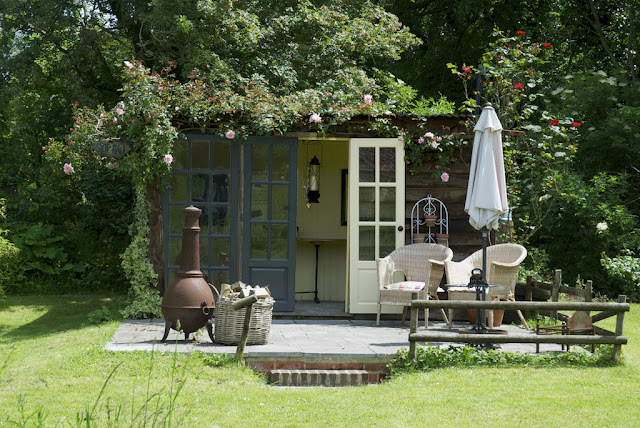 Special Thank you to Tina and Martin

Posted by Jo Sheldrake at 06:59 No comments: